Why Were Miranda's Mails Missed By Mueller?

The Special Counsel that was formed to investigate "RussiaGate" appears to have been oblivious to the fact that emails were exported from Luis Miranda's mailbox on May 23, 2016. Did the Special Counsel choose to omit information or did the evidence from Crowdstrike not inform them of all activity that occurred at the DNC?

For those who don't already know, analysis of the leaked DNC emails that were published by WikiLeaks was carried out earlier this year and it revealed that the emails were acquired in multiple batches on different days. (This is something that can easily be verified independently by simply looking at the last modified dates in the metadata of WikiLeaks' collection of DNC emails.)

The first batch of emails acquired in May were mostly from Luis Miranda's mailbox (which was also the source of most of the emails dubbed as "damaging" by the media), however, emails from Jeremy Brinster, Ryan Banfill and Andy Crystal also appear to have been acquired on this date.

Strangely, though, there is no mention of this date in the Netyksho indictment or the Mueller report. 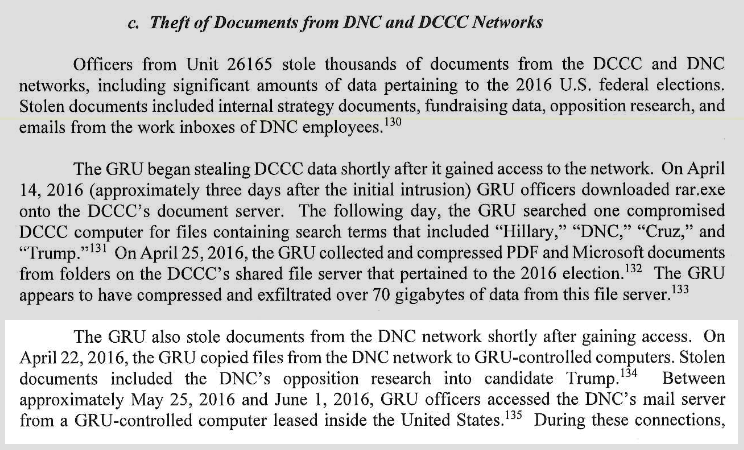 And the Netyksho indictment states:

The phrase "during that time" implies that research attributed to Yermakov occurred between the dates cited.

However, we already know that DNC emails published by WikiLeaks started to be acquired before that time.

To clarify, this means emails (from mailboxes of Miranda, Brinster, Banfill and Crystal) were exported on May 23, 2016 and then, approximately 2 days later, Yermakov allegedly researched PowerShell commands to export emails and the DNC's mail server was allegedly accessed by GRU officers who then took a batch of emails spanning multiple mailboxes.

(I say "allegedly accessed" because both the Netyksho indictment and the Mueller report lack sufficient evidence to demonstrate that infrastructure attributed to the GRU was genuinely controlled by the GRU.)

And it seems the activity relating to May 23, 2016 may be unknown to the Special Counsel for some reason.

CrowdStrike had started monitoring the network two weeks prior to the email acquisition on May 23, 2016. So, they should have captured and recorded evidence of this activity but, oddly, it seems the Special Counsel was unaware of it.

Hours after the May 23 acquisition, Yared Tamene sent an email to DNC staff notifying them of required maintenance that would be carried out later that day.

It's unclear what prompted this but as this occurred between the two dates, it seems worthy of highlighting. This was something originally noted by Forensicator and reported on in his analysis of the DNC emails:

It seems we aren't being told the full story about what happened at the DNC and it seems critical evidence relevant to this is missing or was ignored by the Special Counsel.

As we don't know who was responsible for the omission or who accessed Miranda's mailbox (and others) on this earlier date, we have good reason to be skeptical of both the Special Counsel and CrowdStrike especially when we consider that May 23 may have been the catalyst for all that immediately followed it and they have not accounted for this earlier activity.

This absence of information from the Mueller report is troubling and it's a shame that mainsteam journalists would rather conflate reasonable doubt with a "totally debunked conspiracy theory" than actually acknowledge that issues such as this exist.